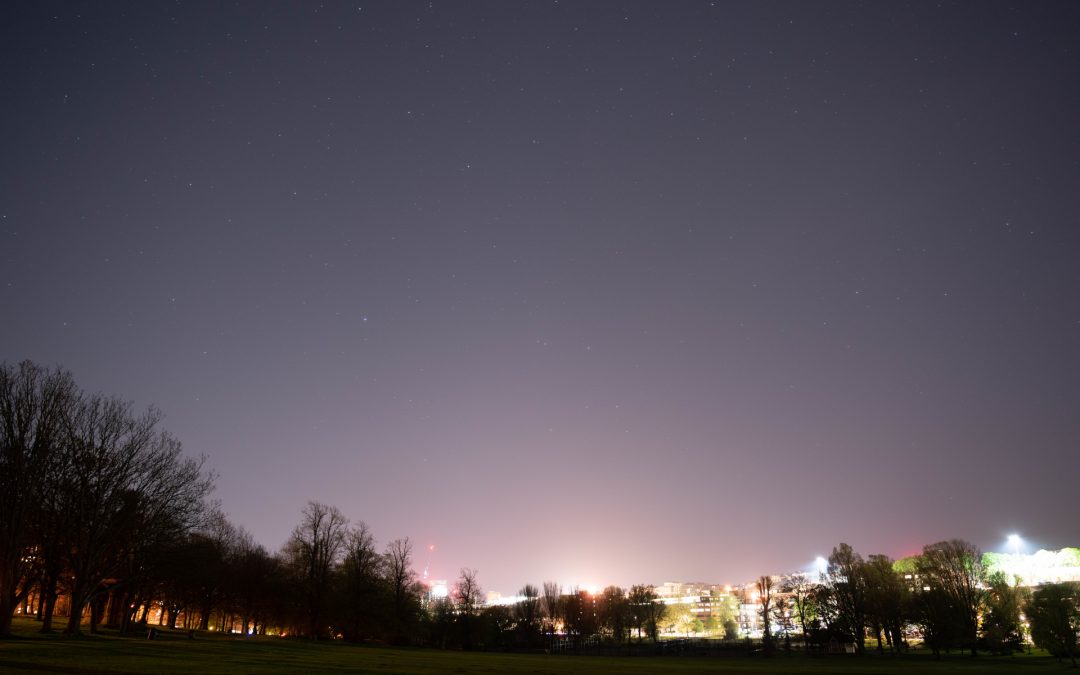 With Dark Skies week upon us, I thought it would be fun to take a nocturnal wander around The Living Coast UNESCO Biosphere and see if I could find the darkest locations within it’s boundaries. The Living coast is actually one of a very few URBAN biospheres, and although the boundaries include a significant area of the South Downs National Park, which is designated as an International Dark Skies Reserve, sadly, due to the amount of adjacent land area taken up by brightly lit and densely developed areas, most of it isn’t truly dark at all in our neighbourhood. That felt like a challenge – maybe I could identify some locations where you can see more stars than others.

The Bortle Scale for dark sky

Let’s start with some definitions. Unsurprisingly the centre of Brighton would be classed as “inner city sky”, with only a few stars visible to the naked eye. This is also known as Bottle scale 9 for the astro-geeks among us. You would expect the darker parts of the beach to be “Urban/Suburban Transition” or Bortle scale 7, with a few more stars visible but still not many. Most of the green parts of the Living Coast area would be classed “Suburban Sky or Bortle scale 5, and sadly none of it is “Dark Sky” or Bortle scale 1, but maybe, just maybe I might be able to find a dark corner where you reach “Rural Sky” levels of natural darkness or Bortle scale 3? With good conditions you can photograph the milky way in these Rural Sky locations. 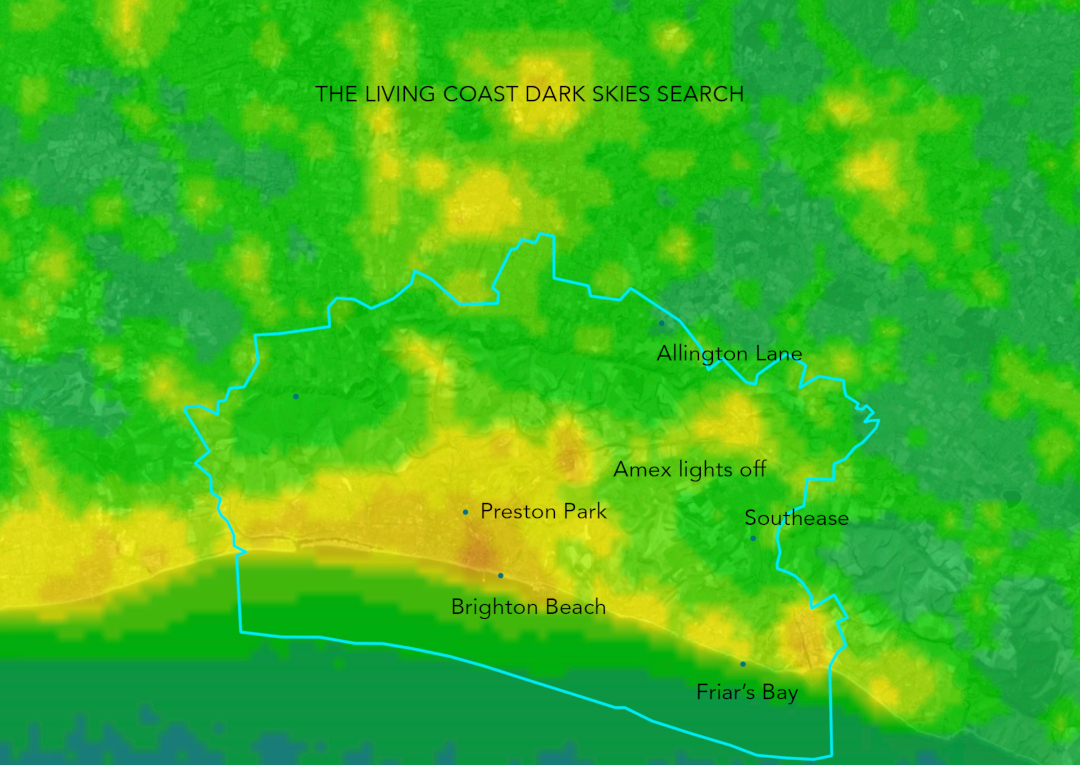 I used the Visual and Infrared Imaging Radiometry Suite on NASA’s Suomi satellite to plan my tour using satellite measurements of light pollution. It would be very nice to get a shot of the milky way, but at this time of year for that you need a good dark view to the South East after 1:30 a.m. You also need a cloud free sky and no moonlight. Sadly, since the clouds were forecast to build up at that point I was going to be disappointed there. But we are in the peak of the Lyrids meteor shower right now, so with clear skies to 1:00 a.m. I thought I’d go for it anyway on the off chance I might catch a meteor in a frame at some point. 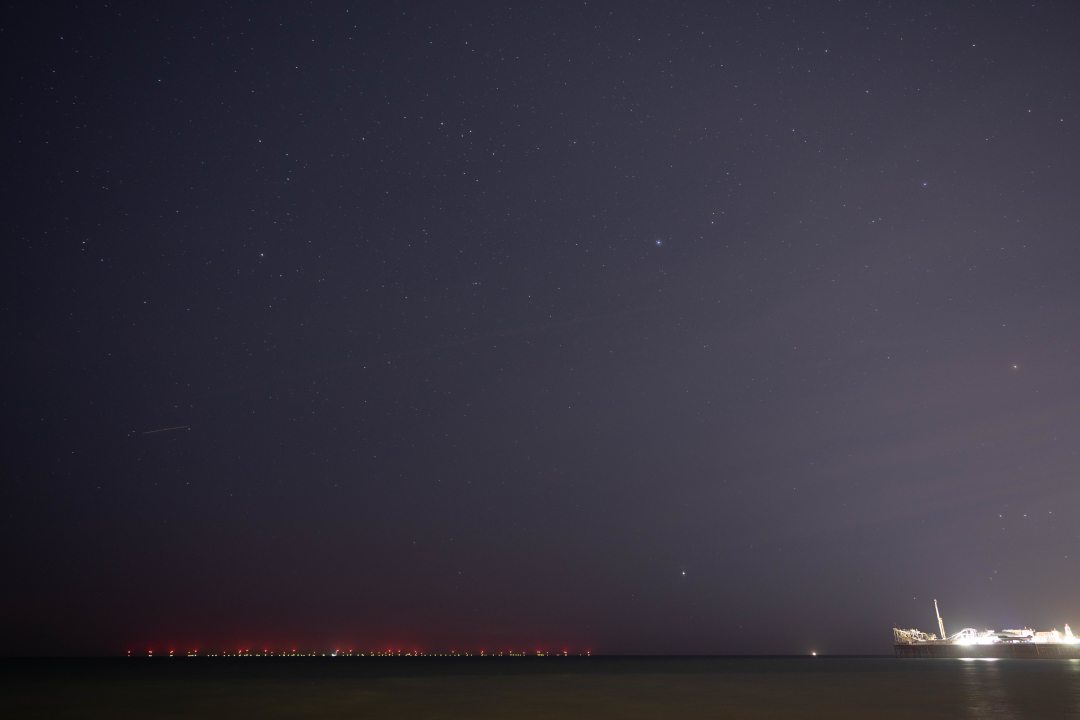 Firstly I took some photos on the Beach to the East of the Palace Pier, and also in the middle of Preston Park, just to give a comparison. Amazingly Orion was just visible even over the brightly lit Pier. It might surprise people to know that light pollution in residential areas is actually gradually decreasing slowly, due to small improvements in the shielding and spectrum on street lights. In theory, there is no reason we couldn’t see the milky way from the beach or Preston Park one day, if we were only to put a little more effort into lighting design. Disappointingly from Preston Park, the sky was completely blown out by the lights from the railway sidings, which have clearly not been installed with the benefit of a professional lighting designer, and they currently blast huge amounts of wasted light all over the community and into the sky above the city. On a positive note the Amex Stadium Grow Lights are mainly off at the moment, so there is currently less skyglow from that source. 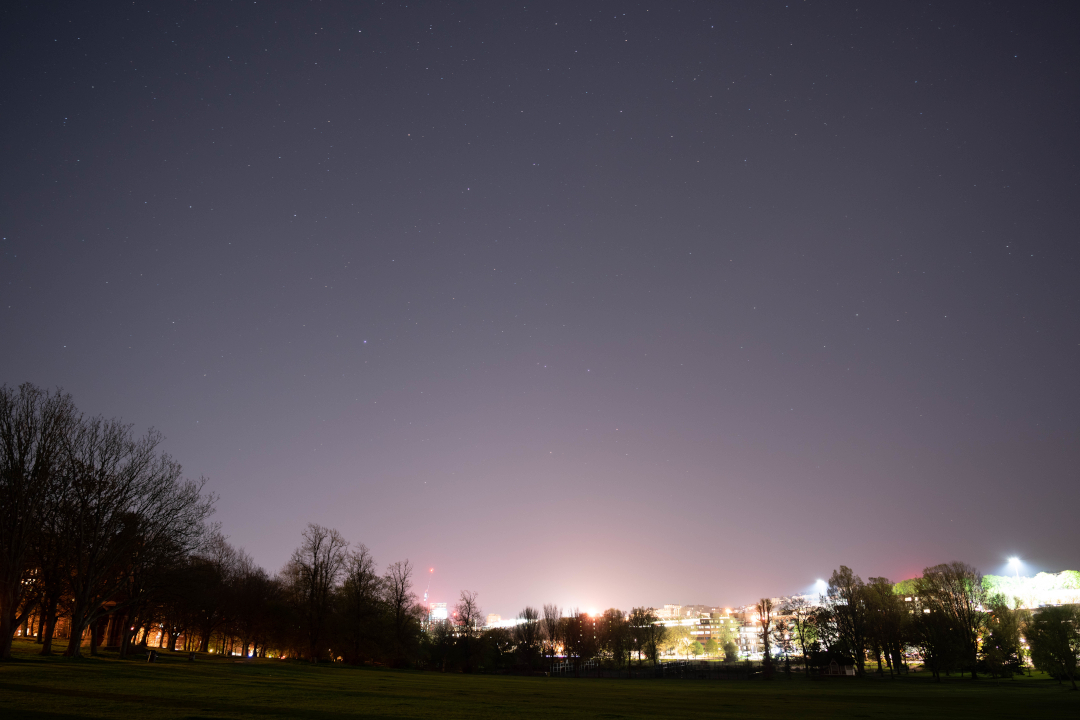 After Preston Park I headed to Peacehaven: Frair’s Bay geological site, which has the wonderful giant fossil ammonites. This is because the street lights are shaded off by the high cliffs there, and I hoped that this would help me get a cleaner image. The chilly wind was also coming from the North East, and the cliffs would make the whole task a lot more comfortable. The skyglow from Brighton and Newhaven was significant, but fell off quickly, and I could still see quite a few stars. The lights from Rampion wind farm are surprisingly problematic, and could helpfully also use a bit of simple design input to reduce their impact on the shore. 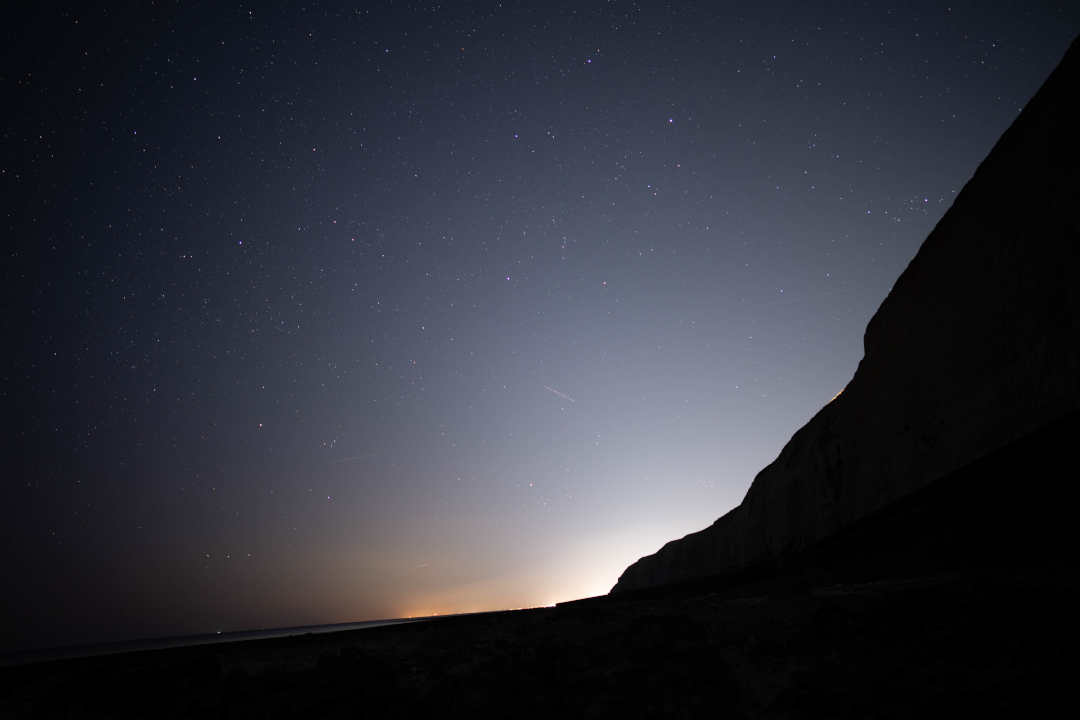 My next chosen spot was near the bridge at Southease – right on the Eastern edge of the Biosphere. The challenges here would be Lewes to the North and Newhaven to the South, which as a port, like the railway yard, is very brightly and inefficiently lit with huge lighting stanchions. The satellite data showed Southease to be a reasonably dark area, just nudging into the “Rural Sky, Bortle scale 3” category: so if all else failed I could potentially just point the camera vertically skywards, avoiding the splodges of light from Newhaven and Lewes. 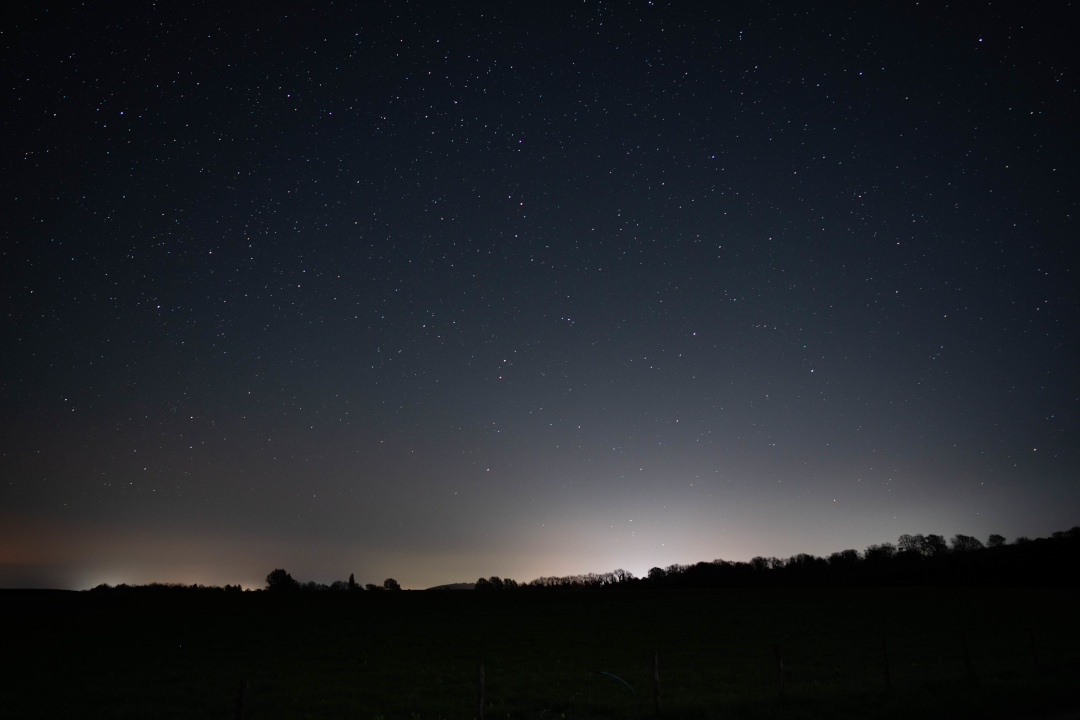 Fulking was also on my list, as a possible, if I had time, but the satellite was telling me that the darkest place in the Biosphere might just be found at Allington Lane, near Plumpton and just to the South East of Black Cap. It was actually pretty decent here, with the downs doing some helpful shielding of the glow from Brighton and Hove. The best meteor came when I was at Friar’s Bay but it was out of shot. As the cloud piled in my trip to Fulking was put on hold. 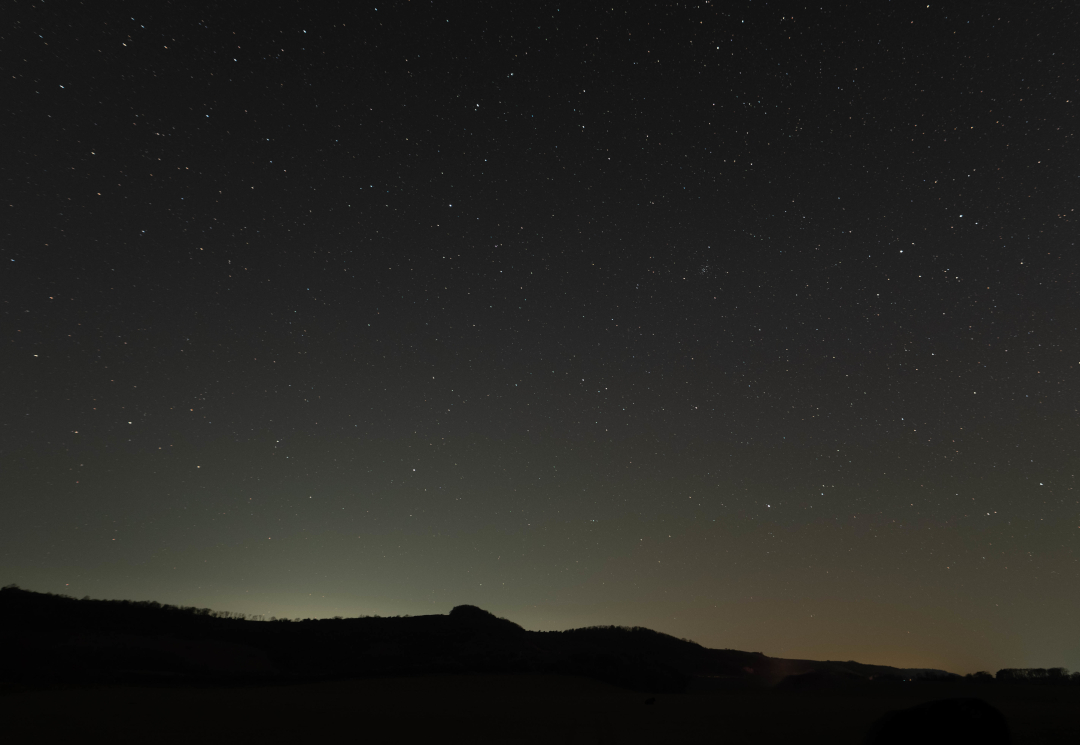 So my conclusion is that Allington Lane is where I shall go to try and capture the Milky Way over the Downs in August perhaps, if we are lucky enough to get some clear skies during the school holidays for once.

Find out more about Steve’s work by visiting his website. 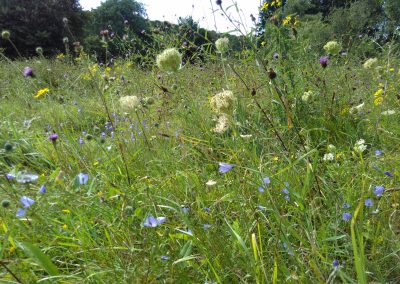 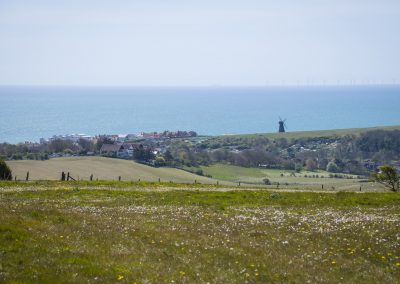 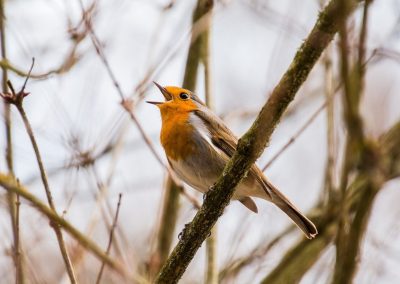 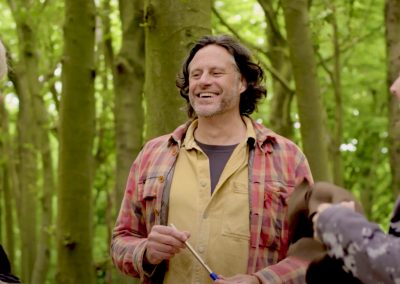 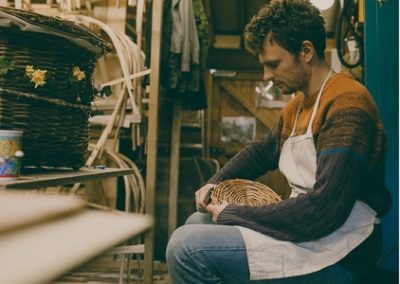